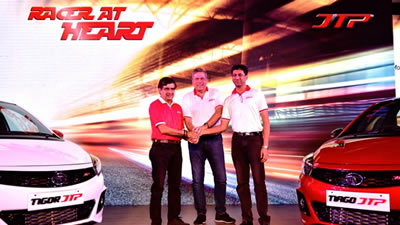 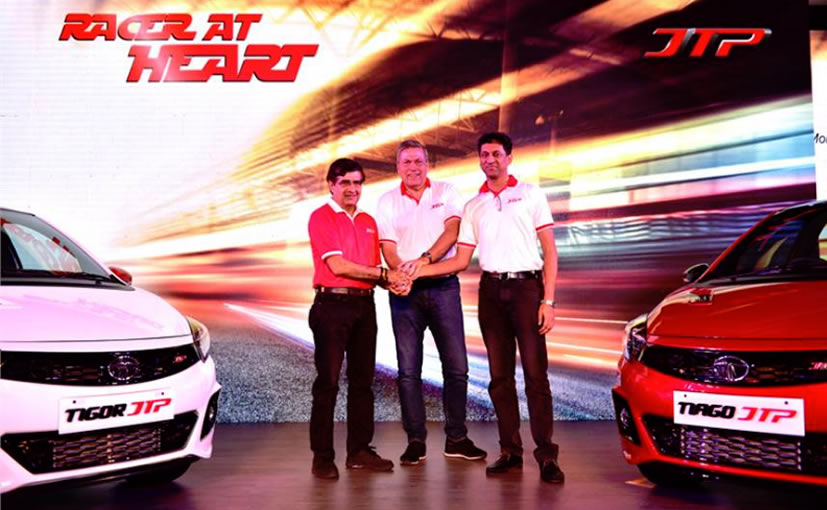 The wait for the hotted-up Tiago and Tigor has ended, as Tata Motors has launched the Tiago JTP as well as the Tigor JTP today. The Tiago JTP has been priced at Rs 6.39 lakh, while the Tigor JTP retails at Rs 7.49 lakh. At this price, both cars sport a premium of Rs 1-1.2 lakh over their standard, top-spec siblings (all prices, ex-showroom and introductory).

Born out of Tata Motors’ joint venture with Jayem Automotives Pvt. Ltd (known as JT Special Vehicles or JTSV), the performance-oriented Tiago JTP and Tigor JTP have been modified keeping three basic aspects in mind – enhancing engine output and performance, adopting a sportier design theme inside and out and making the cars handle and sound better.

As such, the Tiago JTP and Tigor JTP remain identical to their non-JTP siblings in terms of dimensions, but run a lowered ride height. Ground clearance for both cars is rated at 166mm, 4mm lower than the standard Tiago and Tigor. Both run a tweaked suspension and steering setup, which Tata promises – along with the lowered ride height and wider tyres – will make the performance cars handle much better than their standard versions.

As we’d reported earlier, the 1.2-litre turbo-petrol in the Tiago JTP and Tigor JTP does indeed make more horses than the Nexon’s unit – if only marginally, at 114hp – and produces 150Nm of torque. It’s mated to a 5-speed manual gearbox, and Tata claims the Tiago JTP is capable of doing the 0-100kph sprint in just 9.95sec, while the Tigor JTP takes 10.38sec to reach that mark. That time makes the Tiago JTP over 5sec quicker to 100kph than the non-JTP model we’ve tested in the past. Both cars also get multi-drive modes – Sport for performance and City for efficiency.

On the outside, both feature a redesigned front bumper with an enlarged grille, chrome-ringed projector headlights (as seen on the Tigor facelift) and 15-inch diamond-cut alloys mounted on 185-section tyres. Side skirts and a rear spoiler are part of the package, as is a contrast roof, contrast ORVMs and JTP badges on the grille, fender vents and at the back.

The interiors are all-black, with red surrounds for the AC vents, and the leather-wrapped steering wheel features contrast stitching. The seats feature a red hexagonal motif stitched into them, and there’s double contrast stitching on the seats as well on as the gearshift gaiter. Even the pedals are sporty aluminium examples. Additionally, both cars get a Harman 5.0-inch touchscreen infotainment system with Bluetooth and voice command recognition. Also standard are dual airbags and ABS with corner stability control.

Initially, Tata Motors won’t be selling the JTP models through all its dealerships. For now, it has handpicked 30 dealerships in 11 cities that will market the performance-oriented cars. That said, Tata Motors wants to make the Tiago JTP and Tigor JTP accessible to prospective customers across India and could add more dealerships to handle JTP cars in the future. An interesting point to note is that both the Tiago JTP and the Tigor JTP follow the same service cycle as the standard models and can be serviced at any Tata passenger vehicle service centre throughout the country.

Our full review of the Tiago JTP and Tigor JTP goes live at 1am tomorrow, so do remember to check it out!